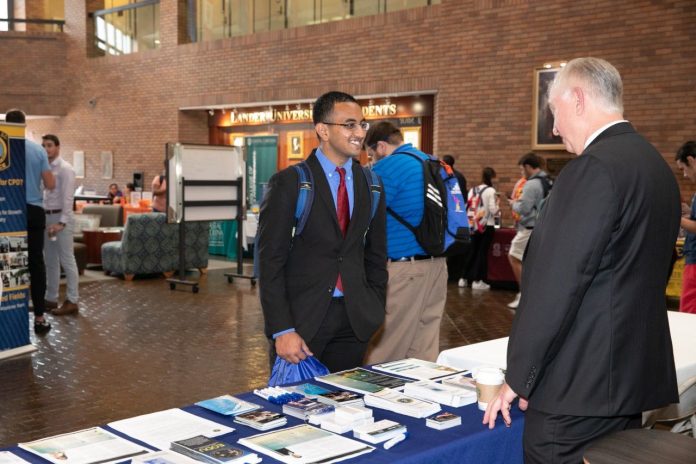 Lander’s Graduate School and Career Fair Largest in Over a Decade.

Making good on its commitment to helping students launch their careers or continue their education at the graduate level, Lander University hosted representatives from 56 employers and graduate programs during its Graduate School & Career Fair on Wednesday, Oct. 10, in the Grier Student Center.

Even though he’s a junior mathematics major and business minor, Tanay Singh, of Columbia, is using the annual event as a networking opportunity for potential future employers. “I just spoke with a recruiter from BMW who remembered meeting me during last year’s event, and he’s already recommending me for several positions,” he said.

“With 56 employers and universities taking part, this was the largest turnout we’ve had in almost a decade,” said Amanda Morgan, Director of Career Services at Lander.

Lori Bassett, Director of Communications for the Greenwood Genetic Center, said the company views Lander’s Graduate School & Career Fair as an opportunity to hire graduates with a distinct skillset. “Lander is unique in having a genetic emphasis in its biology department, so the Lander graduates we hire tend to have more

experience with genetics,” she said. “While we look primarily for science and computer majors, we’re also on the lookout for anyone who can fit into our offerings. The field of genetics is becoming very much data driven so those with a computer science background are especially valuable.

More on the Path of Totality