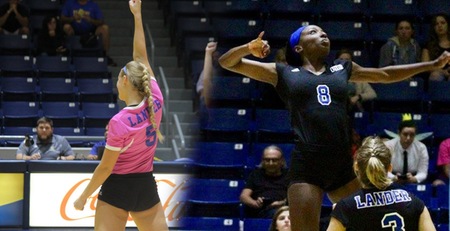 To be eligible for the All-Academic team, a student-athlete must: 1) participate in at least half of his/her team’s events and be either a starter or significant contributor, 2) achieve a 3.3 cumulative grade point average (on a 4.0 scale), and 3) have completed at least one full academic year at his or her current institution.

Kuenstler, a sophomore education major from Bellville, Texas, is fourth on the team with 120 kills and fifth with 42 total blocks. She is averaging 0.58 blocks per set.

Whipple, a senior mass communications major from Brunswick, Ga., is Lander’s all-time leader in career block assists with 396. She leads the PBC in total blocks (121) and blocks per set (1.23).