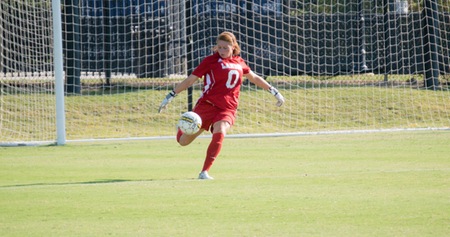 GREENWOOD – Lander’s Sarah Owen, a freshman from Lake Wales, Fla., was named the Peach Belt Conference Women’s Soccer Goalkeeper of the Week it was announced by the league office today.

Owen recorded six saves as the Bearcats opened conference play with a 1-0 shutout of Clayton State. She became the first goalie to keep the Lakers off the scoreboard this season. Owen has played all but 45 minutes of Lander’s five matches and the shutout was her second of the year. She leads the PBC with a .900 save percentage and is ranked third in goals-against average and minutes played.

The freshman is the first Bearcat women’s soccer goalkeeper to earn a weekly honor from the PBC since 2013.