Thursday kicked off the first event for Lander’s newest student organization, Somos LU, who hosted a posada in the Josephine Abney Cultural Center. A posada (also known as a novena in other Latin American countries) takes place throughout nine consecutive days before Christmas (December 16 – December 25). During these nine days, families and communities in Latin American countries gather in a different home every day, taking shelter (posada in Spanish) like Mary and Joseph did in the days leading up to the birth of Jesus. Each host family is responsible for leading the community in singing and prayer as well as providing that night’s feast. Thursday, Somos LU provided Mexican tamales, champurado (Mexican hot chocolate), and Colombian buñelos to over forty students, faculty, staff, and members of the Greenwood community who came out to take part in a Latin American tradition.

The organization just formed this November through the help of Maria Morales, a Junior Education major, and Ariana Trejo, a Junior Health Care Management major, both of whom reached out to Lander’s Hispanic community and students to create an organization where students from all backgrounds can explore diversity right on their college campus. Somos LU’s mission is to empower the Latino community and embrace other cultures in order to educate and promote leaderships skills among students at Lander.

The posada was the first of many upcoming events that Somos LU plans to host on campus sponsored by their members as well as Greenwood’s Hispanic community. Restaurants from the community, like Alicia’s Mexican Restaurant and Buenavista Cuban Café ushered in Somos LU’s first events on campus that introduced students to authentic Latin cuisine, all included in their meal plan! This is not the last time the organization plans to host outside restaurants in the cafeteria, next semester they plan on bringing in Colombian and even Salvadorian restaurants from Greenville onto campus to explore diversity through the wonders of food.

Somos LU’s goal for the future for Maria Morales is to “create a more diverse campus environment where students feel comfortable embracing their cultures. We want to achieve this by educating Lander University about our cultures and positive contributions to society.” As one of the fastest growing minorities in this country and at such a pivotal point in political history, Somos LU hopes to empower the Latino community through student involvement, education, community services, and some of the world’s most delicious food! 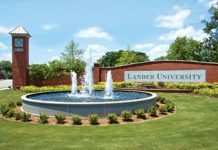