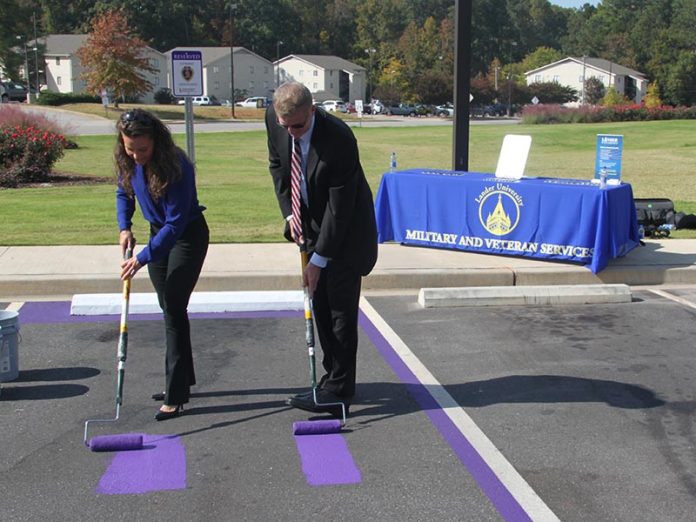 With the main entrance to its campus adorned with American. flags, Lander University recognized and celebrated all members of the U.S. Armed Forces during a Veterans Day celebration on Friday, Nov. 11.

Representative Mike Pitts (R), serving District 14 in South Carolina’s House of Representatives, was the keynote speaker during a ceremony in the Abney Cultural Center Auditorium. Pitts, a 1985 Lander graduate, is a retired police officer and served in the U.S. Army Reserves.

Immediately following the ceremony, a parking space located in front of the Carnell Learning Center was officially dedicated and will be permanently reserved for recipients of the Purple Heart, which is awarded to armed forces members who were wounded in combat.

“We’re committed to those who have selflessly served our great nation and this spot is a visual symbol of the pact we have with them,” said Lander President Richard Cosentino.

At 6:30 p.m., the Lander Bearcat men’s basketball team faced off against Brevard during a Military Appreciation Basketball Game as part of the Bearcat Classic Tournament.

We have a winner